I understand, hide this

Added to your Cart

Like the mythical vampire who never rests its eyes for the day, or night, you too may be having sleepless nights about what to dress up as for the 31st October. Hopefully, a light bulb just went on in your head. Vampires will be one of the hottest and darkest fancy dress themes for Halloween 2019.


For reasons of replicating Bram Stoker's Dracula to Stephanie Meyer's Twilight character Edward Cullen, or fans who want to look like characters from the hit TV serials Vampire Diaries or True Blood, you will certainly be keeping up with the coolest trend of mens' Halloween costumes.

Experience an awakening once you look at the following top choices for Mens Vampire Fancy Dress.


Centries old and living off the blood of humans, it's no wonder why this title is so fitting for this costume. This layered vest with lined cape is a great example of the classic Gothic vampire.

Greeting house guests who enter a Transylvanian decorated party is best done in this swanky attire. A nobleman in the day and a blood-hungry monster at night. 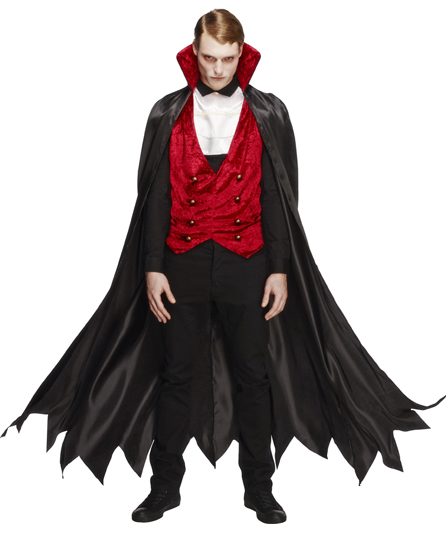 
Not all Gothic Costumes are fashionable for today's young vamps; however this casual cool collar cape and waistcoat seem to get the ladies offer their blood-field necks as a donation! 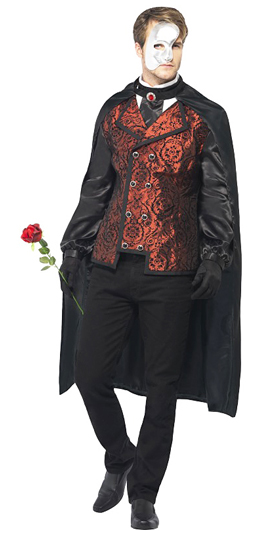 Smart, sophisticated, and likely to get the most attention for being the best looking Dracula at the party. Sanguinarians always need to look perfect. This dapper vampire outfit is a prime example on how to stay classy with fangs.

Your new reason for staying up all night is with excitement for dressing up as one of these top mens Vampire Costumes. Choose from our perfect vampire accessories, such as fangs and blood effects, to enhance your fancy dress.

A style of sorcery that will leave a lasting impression - deeper than the bite. 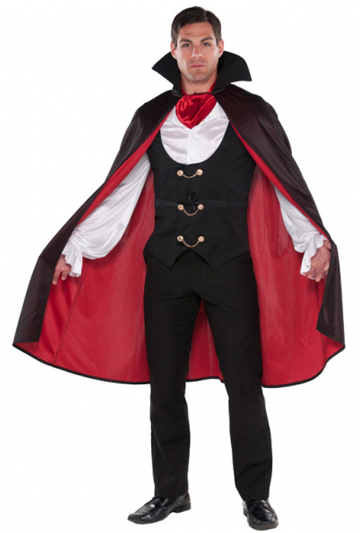 
Time to clear out the bones in your closet! There's no need to hide the excitement of dressing up in a horrific costume on 31st of October. In fact, when startling ideas come to mind, how about turning yourself into one of the scariest aspects of the dead as a walking skeleton. Devising ways to petrify your friends and family can be fun and successful - but only when done right! To help you kick things off the frightening fest we've come up with a few mens Skeleton Fancy Dress ideas that'll be a hit on Halloween 2019

Since the goal is causing extreme fear, this costume combines three scary themes that will certainly make party guests run and hide! Nothing is more gruesome than a centuries old flesh-hungry swashbuckler who has risen from the dead.

Glow in the Dark Skeleton

You'll hear party guests shriek in horror after coming across a talking skeleton that appears in the dark! The black skin-tight jumpsuit helps to camouflage the rest of the body while the green glow in the dark skeleton print feature brings out the bones in you. 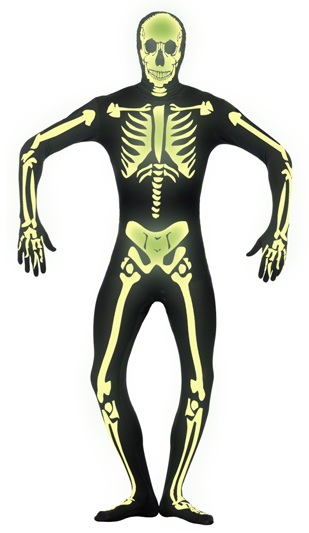 Try standing still like Halloween decor and then suddenly jumping in front of the guest that walks in the door! Ways to scare people at the monster mash are endless with this all-in-one hooded jumpsuit with skeleton print. 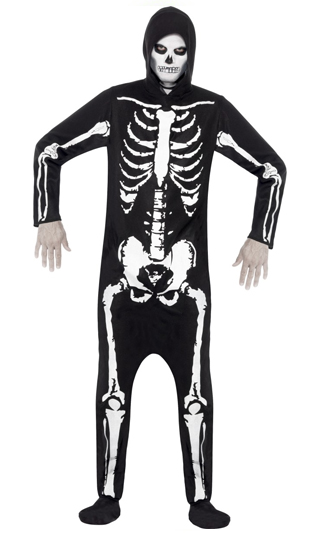 By far the most spine-chilling of them all, this costume will certainly make you rattle in your shoes! After escaping the sarcophagus, this skeleton's apperence includes a cut up draping robe with skeleton hand covers as well as the unique feature of the ani-motion skull mask to move when you move! 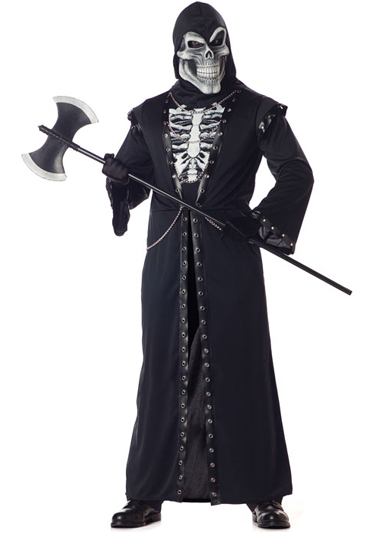 The night is dark and a perfect location to step into the party in one of these spooky Halloween costumes. This was just a taste of some great costumes you will discover from our wide range of mens skeleton fancy dress. Our accessories, masks and makeup kits will finish off your look to make it seem that a living skeleton escaped the graveyard.

As the most anticipated fancy dress event is soon to take place on October 31st you'll want to look your utmost scary to win the costume competition.


Notice a lot of undead beings taking over our society? As in the invasion of the concept of zombies. As these walking corpses were one brought to life through witchcraft, today's culture has depicted a realistic view of zombie creation, which comes in through the form of infectious diseases. With popular films, such as Zombieland, I am Legend, and Shaun of the Dead, we are acquainted with the idea of everyday humans becoming infected flesh-hungry zombies who exponentially increase after they attack other people.

This popularised theme will become the basis of creating your ultimate horrifying costume. We can help get you zombified with the following top mens Zombie Fancy Dress that will make a frightening impression on Halloween.


Looks like the High School football field is contaminated too. This deadly player may have eaten the entire team before making a touchdown! The torn and blood-stained sports uniform with a visually revolting helmet is the creepiest way to shock people in the stands.

With the streets flooded with contagious deadbeats, seeking help and justice from this copper may be a bad idea. It's safe to say criminals would rather be be behind bars than to run for their lives from this blood-covered uniformed policeman. 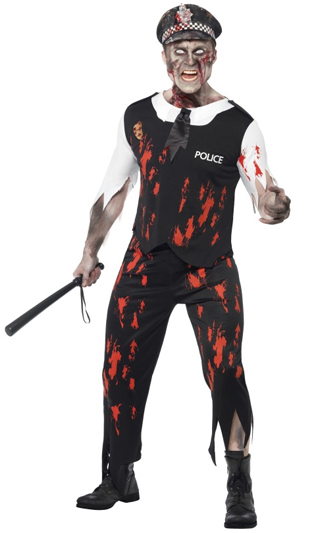 Some zombies who found success in living longer off the flesh of humans will become more and more monstrous in appearance and behavior. Take this guy for example. The unrecognizable ex-human is one of our most top-selling costumes that has always done its job of being the fearsome grungy zombie. The skull-like mask with an attached dishevelled wig is also included. 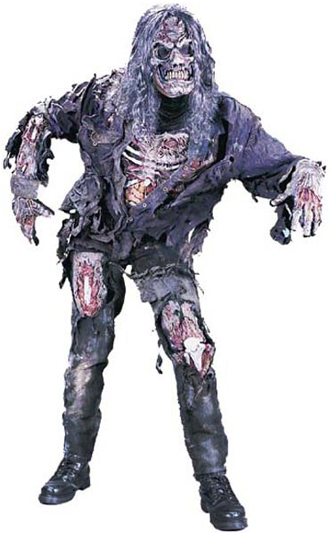 Offer this dead German a pint of blood before he raids Oktoberfest to seek some on his own! Lederhosen never looked so troubling until now! 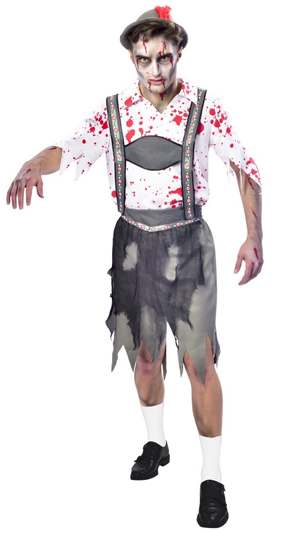 The only reason heros from films are out to destroy zombies is because of the fear of their take over. Your chances are greater if you join the dark, spooky side for Halloween. Now that you've embraced zombies and plan to dress up in one of the top costume ideas presented above, you must also visually finish the look with effects. Complete the transformation with our selection of accessories such as the Zombie Makeup Set, Zombie Mask and Glove Set, or our different coloured makeup for the face and body. Watch the guests drop dead as you stumple into the party making dead look good! 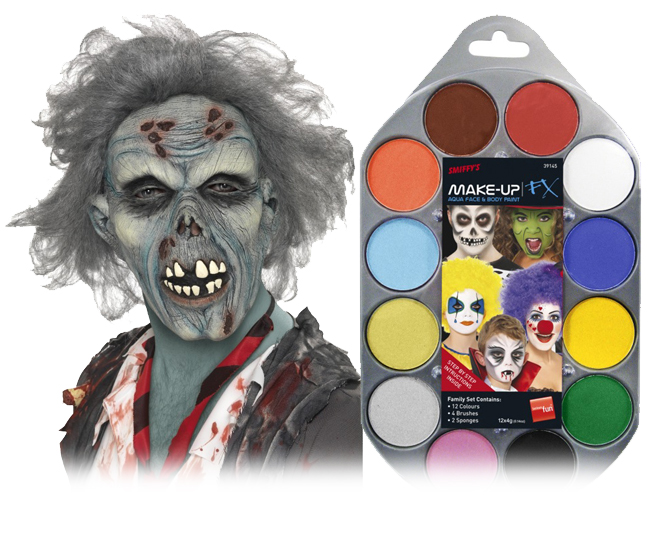 
The storyline is set, viewers are engaged, the suspenseful music intensifies, and finally the moment the character opens the door - Bam! Everyone in the cinema has jumped out of their seats and felt their adrenaline rushing. That "bam" factor is essentially an action of fear caused by the scary antagonist in Horror Films.


By having the audience heart race, sit on the edge of their seats, and sometimes cover their eyes - then you know an epic horror movie is being played. If you get a thrill out of recreating people's worst nightmares then check out these mens Halloween Horror Movie Costume ideas to turn yourself into some classic scary movie characters at the fancy dress party on the 31st October.

Grab popcorn and hold on, you're in for a terrifying selection of costumes.

In the 80s, the film Child's Play introduced us to the soul of a murderer who made its way into a Good Guy Doll. Party guests who watched this movie never looked at children's toys in the same way again and will find it difficult to face this life-size sinister toy! 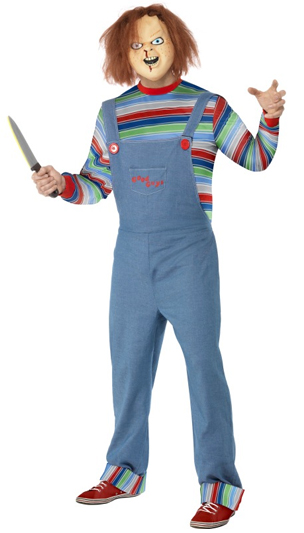 This drooped jaw-dropping face is instantly recognised as the violent psycopathic killer from the 1996 slasher film Scream. The ghostface mask and black robe are exactly what you need to startle party victims. 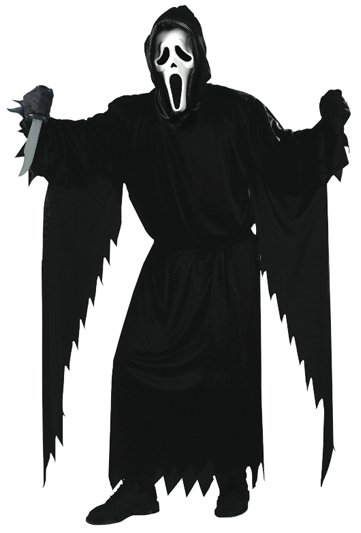 Don't rest your eyes and fall asleep by mistake because Wes Craven's A Nightmare on Elm Street serial killing character will make his way into your dreams! Access the scary hidden memories of party guests who will with terror after coming across the hideous melted mask and horizontal striped red and green top. 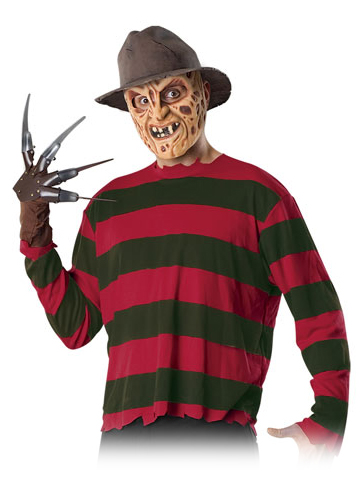 One aspect of horror that includes light humour are fantasy films such as Beetlejuice. The black and white suit, white wig and makeup kit will transform anyone into this lewd and morbid character from the late 80s.

These horror films have spawned a specific genre of frightful characters that play a huge role in Halloween. The fancy dress ideas present above will definately cause a riot of frightened party guests with absurd phobias caused by these monsters.

Halloween is around the corner and you're most likely looking to wear something to scare your friends and family at the fancy dress party. The notion of becoming a jester may have not crossed your mind as a frightening costume. You will be srprised as to how much people will dread coming near you if you select on e of these mens Halloween Jester Fancy Dress options.

Before we get into the evil side of outfits, first get familiar with the traditional garb of these historical entertainers. Take a look at the following image:

As you can see, the traditional Harlequin Jester get-up is similar to this black and white chequer board style top and trousers with an attached ruffled collar and matching eccentric style hat. The fashion is as such since they were prime source of entertainment during the Medieval Age and Tudor Era.

Even though this old school clown can put coulrophobics in a panic the next Halloween Jester choices we are about to present will put almost anyone in a petrified state.

Who knew that putting on an this evil skeleton mask with jester's outfit would formulate a vicious looking monster? You certainly won't be laughing at his Jokes! 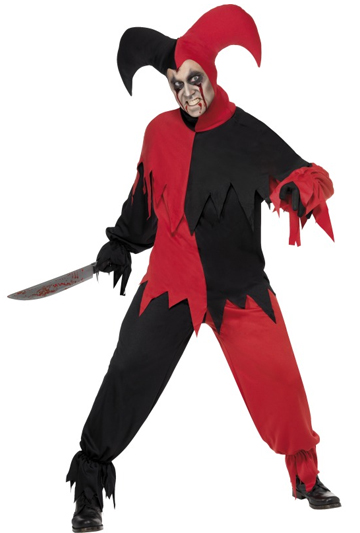 Similar to the traditional outift, this chequerboard costume distincitly differs from the original as it includes jagged edges to the hemline and the sinister skull-like mask. Not the best way to keep the royal court happy as they may faint from shock! 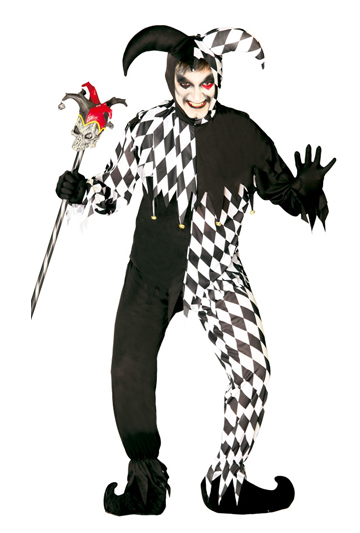 Although the tricks and jokes are meant to be mad, there's always a limit. This performer has crossed that limit and has gone completely bonkers. The black and red designs topped off by the tri-jester hat enchances the lunatic look. 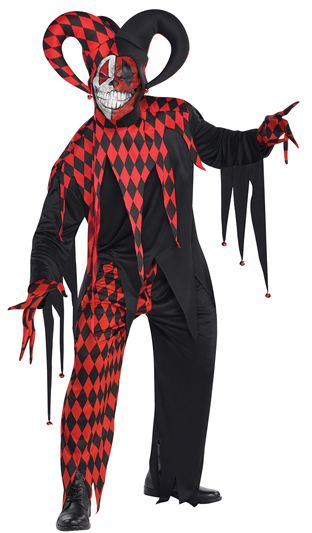 Now that youve explored the psychotic and daunting options of mens Halloween Jester costume ideas, make it the number one scary fancy dress at the spooky party. When forcefully sharing your morbid jokes and stories, grab a hold of the Jester Skull Cane from our Accessories category!